Places to Visit on Girnar

Girnar is one of the oldest mountains of the county and the tallest mountain of Gujarat. The height of Girnar is 1069 m or 3,507 feet. As per the archaeological data, it’s even older than the Himalayas. Surrounded by the Gir National Park and Gir wildlife sanctuary, the forest around Girnar is only home to the majestic Asiatic Lions in the world.Places to Visit on Girnar

It’s to be noted that the Ropeway will reduce the total climbing time from a few hours to under 10 minutes and will make reaching Ambaji more easy and accessible to the people of all ages. Hence, will attract more tourists and give them enough time & energy to discover places other than Ambaji temple. Here are the places that you should consider visiting if you are planning to visit Girnar on a Ropeway.

Located at the height of 3300 feet from the sea level, the Ambaji temple is the main attraction of the Girnar mountain. The Ambaji temple has many folk stories and history behind it and enjoys the strong faith among locals as well as tourists. According to the archaeologists, the Ambaji Mandir was made during the Gupt dynasty. It has been noted by some historians that Vamana – An Avatar of Lord Vishnu, prayed Maa Amba at this place. The renovation of the temple was done in recent times before the opening of the Ropeway.

A 9-minute Ropeway ride can take riders from taleti directly to the Ambaji temple. Few steps of the temple after the Girnar Ropeway Udan khatola ride and one reaches at one of the most historical temples of Gujarat. It is also known as Girnari Maa nu Mandir by some bhakts. From the top, one can enjoy the surreal views of Hasnapur Dam, Bhadar River, and the city of Junagadh.

One can take Udan Khatola (Girnar Ropeway) till the Ambaji temple and then climb a few hundred steps to reach Gorakhnath peak. It takes around 1 – 2 hours for to and fro journey to the highest point of Gujarat.

Dattatreya is not the highest peak but surely is the most difficult one. Because of its difficult climb, many people avoid this track. At the peak, there’s a hexagonally made temple of Guru Datatreya. The bell constructed near the temple is huge and holds importance among the followers. According to some shastra, Guru Dattatreya is Lord Vishnu himself. Every Purnima people come to visit the Dattatreya Temple.

Girnar is one of the 4 holy pilgrims of the Jains. Derasaras are located 900 steps below the Ambaji temple. The temples are surrounded by beautiful sculptures and it is believed that it was made by a Kashmiri pilgrim named Natasha. It is noted on the stones that the king of Junagadh Ra’Mandalika covered the temple with gold. Apart from the Neminath temple, there are places like Derasaras made by Vastupal and Tejpal, the temple of King Samprati, Hathikund and the caves of Rajul. 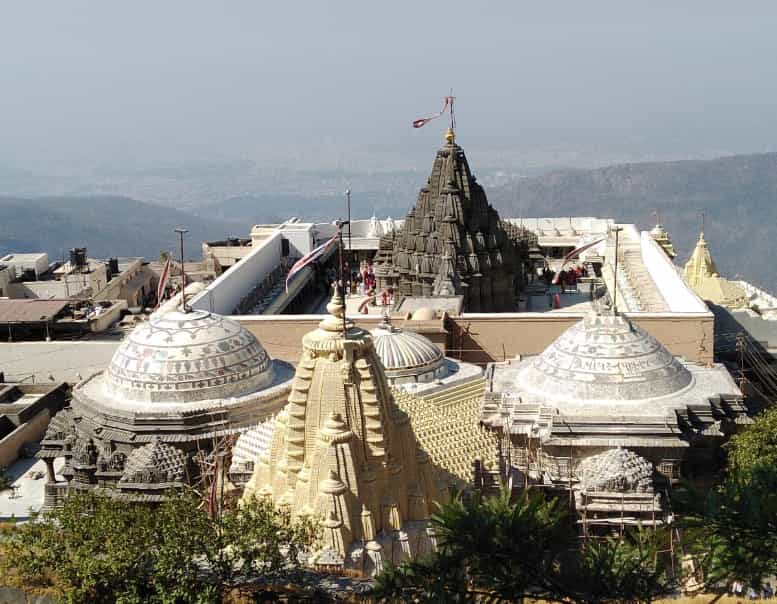 Derasaras is located at 900 steps below the Ambaji temple. A few minutes from stairs after taking the ropeway.

How to reach to the Girnar Ropeway – https://aapdujunagadh.com/aj/girnar-ropeway-how-to-reach/